This is Indonesia-US US$ 20 Billion Business Agreement 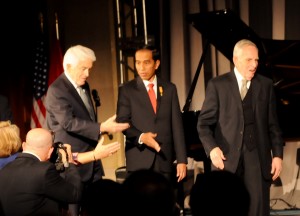 President Joko Widodo greeted by US Chamber Officials when attending US Chambers gala dinner, in Washington D.C., US, on Monday (26/10) evening local time

After meeting the President of the United States Barack Obama at the White House, Washington DC, on Monday (26/10) afternoon local time or on Tuesday (27/10) dawn Western Indonesian Time (WIB), President Joko Jokowi Widodo visited the Office of US Chamber of Commerce to witness the business agreement between Indonesia and US businesspeople.

As previously mentioned by the Head of the Indonesia Investment Coordinating Board (BKPM) Franky Sibarani, the US$ 20.075 billion business deal was reached during the state visit of President Joko Widodo to the US.

The details of the business deals are as follows:

Investment worth US$ 5 to 10 million between Kilat Wahana Jenggala and Hubell Power Systems for the expansion of existing plant producing polymer insulator transmission for electricity distribution and for adding localized transmission. (SI/UN/ES) (RAS/MMB/YM/Naster)