This is the Type of Company That Eligible for Tax Allowances 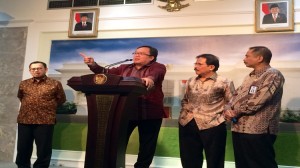 One of the policy package that announced by the government related to strengthening rupiah exchange rate is the provision of tax incentives, also known as tax allowances.

Minister of Finance Bambang Brodjonegoro explained, the government issued the new regulation regarding tax allowance, with criteria are made more flexible; not tight and not too detailed as before.

“We more emphasis that we want to give tax incentives to companies: a. The Companies investing in large amounts; b. Have an export orientation; c. Using a high level of local content; and d. Conducting R & D,” he said.

In essence, the Minister of Finance continued, the new government regulations that are not too rigid, not too detailed per sector as before. “So there is relaxation,” he explained.

Related with the tax allowances, according to Bambang, there is an additional incentive, especially in companies that doing reinvestment of profits obtained, or from dividends that had wanted distributed to shareholders or returned to the country of origin. “It was decided to reinvest then it will get an additional allowance facilities,” he explained.

Similar facilities, Minister of Finance continued, will also be given to companies that do research and development (R & D). Therefore, Indonesia is not only able to doing assembling but there must be a product development through R & D.

Moreover, Bambang said, if the company doing export a minimum of 30 percent of the production is also entitled to an additional allowance.

Regarding, government regulation of VAT (PPn) which not collected, according to the Minister of Finance, especially is to encourage the logistics sector, in addition of course other commodities of concern.

“Our focus is how to reduce the cost of logistics, one of which is for shipbuilding, as well as equipments related for railways, air transport and others similar,” Bambang said. (Humas Setkab/ES)