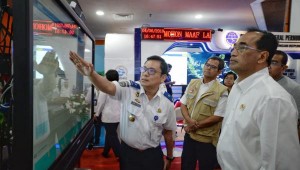 This years Eid mudik (annual exodus) traffic is relatively smoother compared to that in the previous years, according to Minister of Transportation Budi Karya Sumadi.

Infrastructure connecting cities in the islands of Java and Sumatera and strategies prepared to ease traffic has made this years mudik traffic smoother, the Minister said in a press conference at 2019 integrated Eid transport post on Tuesday (4/6).

The Minister added that this year is a proof that infrastructure brings benefits for the people.

Budi added that this years success is not only the result of infrastructure development but also of good cooperation among stakeholders.

I appreciate cooperation between the Central Government, the Indonesian National Police, and regional governments that take part in making this years mudik traffic a success. They work really well. For example, this year we did not find any roadside markets (that usually cause traffic). Even Nagrek area that is usually hit by congestion is congestion-free this year, he said.

On that occasion, Budi also urged mudik travellers to return to Jakarta is on 6 or 7.

The peak the Eid reverse exodus traffic is predicted to happen on 8 and 9 June. Therefore, I advise mudik travellers to return to Jakarta on 6 or 7 June, he said.

Budi also stated that the number of traffic accidents during this years mudik traffic season drops by around 60%, adding that this figure is quite encouraging because safety aspect can be improved during this year.

The number of traffic accidents drastically drops by around 60% compared to that last year. It means that measures that we have taken to smooth this years mudik traffic and to improve safety aspect have been successful, Budi said.

On that occasion, Budi added that regulating toll roads, reducing mudik travellers travelling by motorcycles through free mudik program as well as ramp check on buses have reduced the number of traffic accidents. However, Budi reminded mudik travellers to remain vigilant especially when returning to Jakarta.

We are usually tired after returning from holidays. Do stay fit. Have some rest if you are tired, he said.