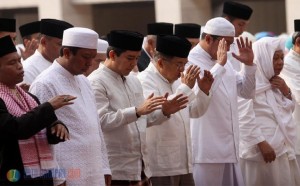 Vice President Jusuf Kalla, Minister of Religious Affairs Lukman Hakim Saifuddin and thousands of Moslems from Jakarta and its surrounding areas took part in an Istisqa or mass prayer asking for rain at the field of Istiqlal Mosque, Jakarta, on Monday (1/11).

The prayer ceremony was led by the Great Imam of Istiqlal Mosque H. Hasanudin Sinaga and Chairman of the Indonesian Ulema Council (MUI) K.H. Makruf Amin as the Khatib.

In his remarks, Minister of Religious Affairs Lukman Hakim Saifuddin called on all Indonesian to do the (Istisqa) prayer.

For the record, the Government through the Ministry of Religious Affairs, on 29 September 2015, circulated notices to the Religious Affairs Ministry’s Regional Office (Kanwil) and to every madrasah (Islamic schools) to perform istisqa.

According to Lukman, although it has rained in several regions in Indonesia, it is still sporadic; thus, he called on people to do ikhtiar (making efforts) in facing the problem of drought and haze disaster.

We hope Allah forgive our sins. If this is a test from Allah, we hope we could minimize and reduce our bad deeds and we hope it (the long drought) will end, the Minister said.