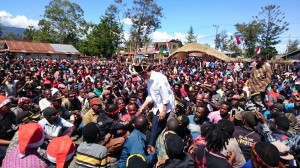 Thousands of residents of Baliem enthusiastically welcomed the arrival of President Jokowi, in Wamena, Papua, Sunday (28/12)

The arrival of President Joko Widodo (Jokowi) to meet the Baliem Valley Peoples was greeted by thousands of residents of Wamena and surrounding areas on Sunday (28/12).

It could even be said that the citizens of the Baliem Valley was deliberately set up the customary party to welcome the number one person in this country.

Once arrived at the courtyard of Lembaga Adat Building, President Jokowi and First Lady Iriana Widodo immediately greeted by the Chairman of the indigenous community and the Governor of Papua, which directly embed the Crown of Indigenous Peoples. While the First Lady was given a bunch of typical flowers of the Baliem valley

During staying in Wamena, President Jokowi purposely takes the time to listen and dialogue with local communities

President Jokowi said that the Papuan people not only need health care, not only requires education, not only requires the construction of roads, bridges, and ports. However Papuans also need to hear and talk. That’s my basic attitude in addressing any problems that occurred in Papua, he said.

President invites all Papuans to end the conflict and violence. “Let us unite, for those who are still in the forest, in the mountains, let us together build of Papua as a Land of Peace,” he said.

President Jokowi in this visit, among others, accompanied by Minister of Home Affairs Tjahjo Kumolo Ministry of Trade Rahmat Gobel, and Cabinet Secretary Andi Wijayanto. (ES).