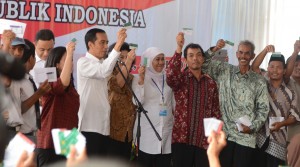 In his speech, President Jokowi asks people to use the KIS when sick. However, the President reminded, in the use of KIS should in stages because there is the sequence, ie from the health center (Puskesmas) and then to the hospital in accordance with the conditions of the disease.

To the hospital, President Jokowi asked that serve the patients who carry KIS with good, because the health card (KIS) does not mean free, but paid by the government. “If there are cardholders who are not served with good by the hospital, just reported,” asked the President.

On that occasion, President Jokowi also handing the KIP to representatives of students of elementary, junior high, and high school. The KIP holders receive tuition assistance each amounting to Rp 400 thousand/year (SD), for junior Rp 750 thousand/year, and for high school students is Rp 1 million/year.

President Jokowi reminded, that the KKS, KIP, and KKS funds use of the government budget. Therefore, he asked the people who receive it to use as well as possible.

To the teachers and parents, President Jokowi ordered that supervise the children KIP receiver. “Children learn to be monitored, not just left, so that children could become useful,” said the Head of State.