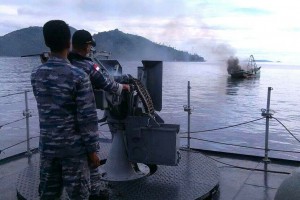 The process starts at 10:20 AM, Bakorkamla with Kapal Negara (KN) together with Kapal Pemerintah (KP) Ketipas and KP Napoleon from KKP with fire did the first fire using machine gun from a distance of 200 meter.

Commander of Fleet of West Indonesia (Pangarmabar) Laksda Widodo explains, the three Vietnamese ships are driven from Tarempa island after being arrested few days ago. We pushed them 3 miles from Tarempa island. Execution would be on the sea with 40  60 meters of depth. While fire would be done from 200 meters of distance. He said. Also watching the execution were Daily Executive Head of Bakorkamla Laksdya D.A. Mamahit, Kapuspen of TNI Mayjen M.Fuad Basya, and officials from Anambas local government.

Previously, President Joko Widodo (Jokowi) through his fan page facebook, on Thursday (4/12), says that the message from this execution is Indonesia is serious in taking firm action on illegal fishing. We have to secure our ocean from illegal fishing, he says firmly. President Jokowi firmly says, again, that Indonesian territory includes lands, air and oceans are sovereignty of Indonesia, therefore every inch of it is the honor of this nation.

It is just like Javanese proverb usually said by Bung Karno about the sovereignty of this nation: Sadumuk Bathuk Sanyari Bumi Ditohi Pati, every inch is defended by risk of life, because it is our honor, says President Jokowi. President reminds that this nation is emerged from patriotism, attitudes of loving homeland, loving Indonesia unconditionally. That love become obligation of all people of this nation to safeguard Indonesia today, for better future, to be more prosperous and honorable, he says. (*/ANT/ES)(Ifp)