Tidy Up, President Jokowi: It Doest Matter if Football Absent at the International Competition for a While 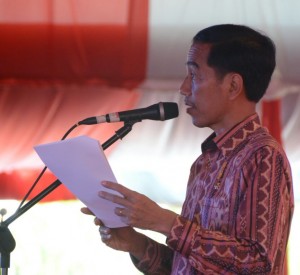 Tidy Up, President Jokowi: It Doest Matter if Football Absent at the International Competition for a While

President Joko Widodo (Jokowi) argues, now is the time to tidy up for the national football. Therefore, it does not matter if we are absent in international competition for a while, but we can build a great achievement in the future.

President believes, if the organization of football in Indonesia has been well laid out, then Indonesia can talk about achievements.

“I’m sure after this revamping is complete the achievement of our football will kept creeping up,” said Jokowi told reporters in Manado, North Sulawesi (Sulawesi), Friday (29/5) morning.

The statement seemed as an answer to a question regarding the possibility of the International Football Federation (FIFA) to impose sanctions for Indonesia, in connection with the conflict between the Indonesian Football Association (PSSI) with the Ministry of Youth and Sports (Kemenpora).

Related disputes of national football between PSSI with Kemenpora, President Jokowi asserted that his attitude is quite clear. He fully supported the Minister of Youth and Sports, Imam Nahrawi steps to reorganize the national football.

According to the President, he has also been asked Minister of Youth and Sports to continue the reform of the national football.

“In football revamping, the most important is coaching a football that became the basis of national football competition that held with fair,” said Jokowi while mentioning, that it also requires the organization of football healthy and trusted by the community.

As for the related on competition, President Jokowi admitted that he had ordered the Minister of Youth and Sports Imam Nahrawi to ensure that able to keep passing the football competition among the regions continuously.

After a day on Thursday (28/5) in North Sulawesi for a working visit to Manado, North Minahasa, and Sangihe, President Jokowi who accompanied by First Lady Iriana on Friday (29/5), then continue working visit to Parigi Moutong, Central Sulawesi.