TNI Always at Forefront in Safeguarding the Nation: President Jokowi 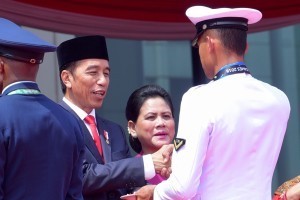 President Jokowi shakes hand with one of TNI personnel at the commemoration of 73rd anniversary of TNI at TNI Headquarters, Cilangkap, Jakarta, Friday (5/10). (Photo by: Public Relations Division/Oji)

The Indonesian National Defense Forces (TNI) has always been at the forefront in maintaining Indonesias unity and integrity, President Joko Jokowi Widodo has said.

I would like to extend my appreciation to the TNI for always being at the forefront in maintaining the integrity of our country and in serving the people as well, the President said in his remarks at the ceremony to commemorate the 73rd anniversary of the TNI at the headquarters in Cilangkap, East Jakarta, Friday (5/10).

The President also expressed belief that in its 73rd anniversary, the TNI will be more respected by other countries and will give their best to serve the people.

On that occasion, the President also mentioned the TNI contribution when natural disasters hit West Nusa Tenggara province, Central Sulawesi province, and other regions in the country, in which the TNI always mobilizes their personnel and military weapons and equipment in disaster relief efforts.

The TNI and the National Police are always at the forefront in carrying out rescue, evacuation, and reconstruction efforts. The TNI also always plays a pivotal role in providing health services. These fast responses have also brought security for the people affected by disasters, President Jokowi added.

According to the President, the dedication of the TNI personnel in serving the people proves its professionalism, in line with this years anniversary theme: TNI Professionalism for the People

On that occasion, on behalf of the people affected by the disasters and Indonesian people in general, President Jokowi thanked the entire TNI personnel who have sincerely helped all victims. Your devotion to the country makes us proud, President Jokowi said, while asking participants of the ceremony to pray for those who perished in the disasters and for the speedy recovery of the injured.

We hope the lives of the people can go back to normal immediately and these trying times can strengthen and solidify our unity as a nation,  the President concluded.