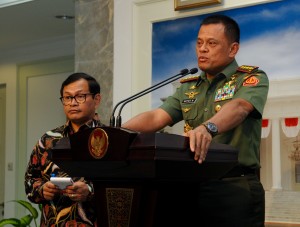 Gatot said that based on Annex 11 Article 2 paragraph 1 point 1, Flight Information Region (FIR) may be given to other countries but it is limited only on the operation of air navigation control.

In this case, Singapore sets the danger area. I repeat, a danger area and thus the area is used only for safety purposes and may not be used to conduct military exercises I repeat, only for safety, restricted for military training, General Gatot Nurmantyo firmly said to the reporters after a limited meeting on Tuesday (8/9) discussing Flight Information Region (FIR).

According to Gatot, if Singapore has conducted a military exercises without Indonesias permission, it means the country has violated Annex 11 by trespassing the border and it is a matter of sovereignty.

Therefore, the Indonesian Air Force (TNI-AU) will continue conducting a security patrol if there are still fighter jets which trespass Indonesian airspace to conduct military exercises. Thus, it is the duties of the air force to drive fighter jets from the Indonesian territory, Gatot added.

On that occasion, Gatot also said that Indonesia (and Singapore) initially had a Military Training Area agreement that expired in 2007 and it was later replaced by the Defence Cooperation Agreement (DCA).

Gatot further said that in 2009, the DCA was signed by the former Minister of Defense, Yuwono Sudarsono. However, in the Article 10 which says international agreement shall be ratified by the House of Representatives (DPR) and DPR still has not given approval to the DCA. Thus, Alfa 1 Alfa 2 Bravo do not apply in the Unitary State of the Republic of Indonesia (NKRI).

According to the Indonesian Military Chief, fighter planes could pass the DCA area because there is no clause to report the situation to Singapore.

This is the situation that I stressed because there is an ambuiguity and that has to be reported, General Gatot Nurmantyo said.