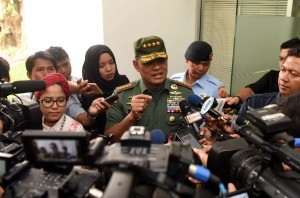 I have received a letter from Marshal M. Binskin stating, first an apology over the incident; second, review to revise the curriculum; third, to form an investigation team; and fourth, to send the Chief of the Australian Army to meet the Indonesian Army Chief of Staff and I, and ask for an apology, Gatot told the reporters after a Limited Meeting on Thursday (5/1), at the Presidential Office, Jakarta.

According to Gatot, TNI, coordinating with the Ministry of Foreign Affairs, appreciates the plan delivered by Marshal M. Binskin. I ask to conduct an investigation first, rather than sending their Army. Afterwards, we can discuss this matter in more detail, Gatot firmly said.

According to Gatot, an evaluation on the continuation of cooperation about language training between TNI and ADF will be conducted based on the results of investigation.

The Commander admitted that TNIs cooperation with ADF has been mantained for a long time and renewed by the committee during his visit to Australia last time. In the meantime, (TNI personnel) were sent to join the current training last October.

According to Gatot, insults about Timor Leste and Papua that should have been independent,  about the individual behavior of the TNI in the past, and a mock against ideology Pancasila that has been changed to Pancagila (five crazy principles) hurted us.

Regarding how long the suspension will apply, Gatot explained that we will wait until there are results of the investigation, and clarification from ADF to TNI. I confirm that cooperation on military education with Australia is temporarily suspended and evaluated. I will not visit Australia, I will wait for the investigation results instead, Gatot concluded. (FID/DNA/EN/ES)(RAS/MMB/YM/Naster)