TNI Personnel Distribution Must be Based on Indonesia-centrist Paradigm, President Jokowi Says 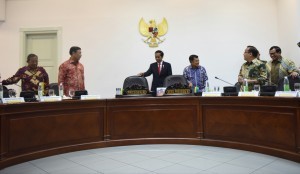 President Jokowi and Vice President Jusuf Kalla discuss with several ministers before a Limited Meeting on Thursday (12/1), at the Presidential Office, Jakarta

In fact, those points are not only the outermost and frontier areas of the Republic of Indonesia, but also the ones with huge potentials to be the core of national economic motor, and national economic growth, President Jokowi said.

Therefore, in its personnel distribution, President Jokowi instructed the TNI to consider paradigm in national development that is changed from Java-centrist to Indonesia-centrist.

In the past two years, the Government has focused on the development acceleration in border areas, eastern Indonesia, outermost and frontier islands. The Government also wants the development to be conducted in more even-handed way, so it will reduce regional gap, particularly between western and eastern Indonesia, President Jokowi said in his remarks on a Limited Meeting on Synchronization of TNI Personnel Distribution with Development, on Thursday (12/1), at the Presidential Office, Jakarta.

The President believes that even distribution of development among regions will develop outermost areas, such as Natuna Islands in the west, Miangas Islands in the north, Biak-Merauke in the east, Rote Island and its surrounding areas in the south, into new economic and development centers.

For that purpose, President Jokowi asserted that TNI must be ready to address a future warfare pattern based on Indonesias geographical character as an archipelagic state.

The President also emphasized that the people who live in border areas need to feel the presence of the state; thus, it will make them proud to be Indonesian.