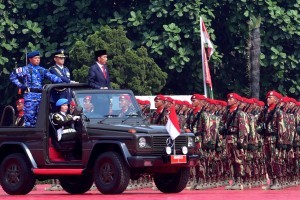 President Joko Jokowi Widodo, during a ceremony commemorating the 73rd anniversary of Indonesia’s National Defense Forces (TNI) reaffirmed the message of the late General Soedirman about identity of the TNI. Politics for military members means politics for the state, loyality of military members is only for the interest of the nation and state, he said.

Therefore, President Jokowi asserted that the TNI is a national institution that belongs to all citizens regardless of any political interest, which always maintain political neutrality in this age of democracy, and also ensure the unity in Indonesian territory and strengthen the unity and solidarity of all citizens.

The TNI must also enhance its synergy with the society in order to manifest the universal defense system. The TNI must move forward and be professional, as well as to synergize with all elements of the country, President Jokowi said in his remarks at the commemoration ceremony, at  the TNI Headquarters Cilangkap, Jakarta, Friday (5/10).

President Jokowi said that the Soldiers Oath and the Sapta Marga or Seven-Fold ways recited by every TNI personnel are the solid moral foundation for the dedication of all TNI personnels to the nation and state.

That are the pledges of eternal loyalty to the Unitary State of the Republic of Indonesia, Pancasila, the 1945 Constitution, and TNI professional pledge for the glory of the state, the President added.

The foundation, the President added, must be affirmed by the TNI and all personnels so that Indonesia can stand strong amidst the uncertainty in this age as well as to face and win global competition.

Also on that occasion, President Jokowi stated that the TNI will face more complex challenges, including advanced information technology, artificial intelligence, autonomous vehicles, social media technology, and a numbers of changes in social aspect that must be anticipated.

We must be vigilant against any external factors that will break the unitary of the state. We must stay alert of internal factors that threat Pancasila as the national ideology, and also alert of the real battle in cultural and economy fields in the era of free trade, and technology developments which change rapidly.

There is no other way that strengthening our national development foundation immediately, the President firmly said.

According to the President, our national development should based on Indonesia-centric paradigm which in line with the universal defense system. We must maintain political stability and ensure the security of the people in order to strengthen the national foundation, and enhance Indonesias power in the international community.

Once again, your duty is upholding the Soldiers Oath, and create a more professional TNI that supports democracy and national development, and also upholding the principle of state politics as mandated by General Soedirman, the President added.

As the one who holds the highest authority in Army, Navy, and Air Force, President Jokowi said that he, along with all ranks of TNI will safeguard the Unitary State of Indonesia, Pancasila, the 1945 Constitutions, and Bhinneka Tunggal Ika (Unity in Diversity).

With your participation, let us eradicate another ideology besides Pancasila; let us eradicate communism and the legacy of the Indonesian Communist Party (PKI) from Indonesia forever, the President firmly said.