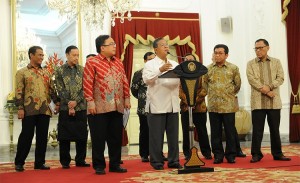 We continue to work simultaneously to finish the deregulation package as soon as possible,  Coordinating Minister for the Economy Darmin Nasution said that on Thursday (17/9), in Jakarta.

The 31 deregulations are expected to accelerate the development of a conducive macroeconomic, boost national economy, protect low-income people and stimulate the economy in rural areas.

Previously, Minister of State Secretary has regulated the Office of Coordinating Ministry for the Economy as a coordination post (posko) of the Completion of Economic Policy Package Acceleration.

The Economic Policy Package is under Coordinating Minister for Economys coordination. There is a post to accelerate the deregulation and we proceed it at Coordinating Ministry for the Economy, State Secretary Pratikno said on Thursday, in Jakarta.

The change on the Government Regulation is expected to attract foreign investment to open Bonded Warehouse and Bonded Logistic Centre, as well as to establish a company or open a representative office in Indonesia, in order to create potention of revenue from tax sector.

By having their own warehouse, the investors will be free from storage cost and will shorten the dwelling time at port.

The press statement added that once the 31 deregulations are enacted, the Government will immediately accelerate the discussion of cross ministries and other institutions regulation from 134 policy deregulation lists announced by President Joko Widodo on 9 Septermber 2015.  (ES/Humas)(RAS/MMB/YM-Naster/Sy)