After terror attacks in Paris, France on Friday (13/11) night local time, the Government of Turkey, since Sunday (15/11) took security measures at the location where the Heads of G-20 countries will meet, which is near the Antalya Coast. The measures are taken to anticipate security threats by the Iraqi and Syrian Islamic State (ISIS) radical group.

Turkey appointed 12,000 security personnel and polices to secure the area. Furthermore, the Turkish military said that air areas near the meeting place will be secured by air defence system to prevent any possible unmanned missile or other possible attacks. Security helicopter will be provided to fly around the meeting place and other strategic points as well.

Security measure that being taken is first, to use face-recognition systems installed in the street, from Antalya Airport to the beaches of Belek town, and around the hotel where the country leaders stay. 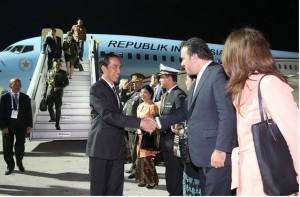 Secondly, airspace and seashore in Antalya will be closed for normal transportation. During the Summit, no tourists are allowed to stay in the hotels in Belek. Person who does not have the identity card is restricted to enter the G-20 location.

If a participant who has the identity card cannot  enter the area, he/she will be requested to enter through the right gate. Meanwhile, the hotels in the Summit area have been equipped with bulletproof glass.

The President of Turkey Recep Tayyip Erdogan directly led the inspection in Antalya and gave the explanation about security measures that must be taken by the Turkish Government. The measures to improve security are not baseless because the Capital of Turkey, Ankara, was under bomb attack on last October, and ISIS is considered to be responsible for the bombing that killed 102 people.

For that reason, regarding the security issue, until the last possible time, the White House has not confimed yet the place where President Obama will stay. For the record, the G-20 is made up of 19 countries and the European Union (EU). G-20 members represent 85 percent of global economic output. Therefore, security has become a prerequisite to the organization of the Summit which takes place on 15-16 November 2015. (EN/ES) (RAS/MMB/YM/Naster)