To be Inaugurated this Noon, New Ministers Join the Prime Cabinet Meeting Directly 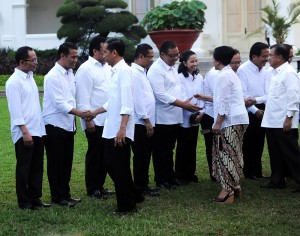 To be Inaugurated this Noon, New Ministers Join the Prime Cabinet Meeting Directly

Along with this ministers inauguration, President Jokowi is also scheduled to inaugurate Cabinet Secretary, Deputy Minister of Foreign Affairs, and Deputy Minister of Financial Affairs for 2014-2019 periods. After that, President Jokowi will chair directly the first cabinet meeting of his government in 2. P.m. Western Indonesia Time, at the Presidential Office, the State Palace.

As reported previously, President Jokowi announced the 34 names of ministers of Working Cabinet on Sunday at 5.16 p.m. Indonesian Western Time in the backyard of Merdeka Palace. Alhamdulillah-hirabil-alamin, in this afternoon, the new cabinet has just been created and we call it Working Cabinet, President Jokowi said it before the announcement.

According to President Jokowi, the announcement is eight days faster that the mandate of Law about State Ministry, which is 14 days. Being different from his predecessor, President Jokowi announced the cabinet by giving introductions and backgrounds of the ministers that he chose to the people.

These are 34 ministers that will be inaugurated today:

15. Minister of Communications and Information : Rudiantara

19. Minister of Cooperatives and Small and Medium Enterprises : AAGN Puspayoga

32. Minister of Research and Technology and Higher Education:  M. Nasir