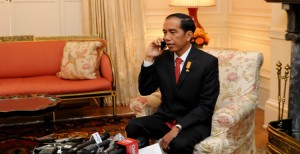 After having a phone call with Coordinating Minister for Political, Legal and Security Affairs Luhut Pandjaitan at 10:30 a.m local time on Monday (26/10), at Blair House, Washington DC, US, President Joko Jokowi Widodo decided to shorten his state visit to the US and head back to Indonesia in order to lead the handling of haze disaster in the country.

Therefore, due to the large amount of complaints from the people and also their reports regarding the haze impacts on their health and social lives, I decided to cancel the state visit to West Coast and will return to Indonesia. I may fly directly to South Sumatra or Palangkaraya, Central Kalimantan. I received a report this morning that it rained a little in Riau, President Joko Widodo said in his press statement at the Blair House, Washington DC, on Monday (26/10) morning local time.

Regarding his schedule to visit West Coast regarding cooperation in information technology and creative industry, President Joko Widodo appointed the related minsters such as Minister of Communication and Information Technology, Minister of Trade, the Head of Investment Coordinating Board (BKPM), and the Head of Creative Economy Agency (BEK) to meet the CEOs in West Coast.

President Joko Widodo and First Lady Ibu Iriana will return to Indonesia on Tuesday (27/10) afternoon and it is scheduled to arrive in Jakarta on Thursday (29/10) by using Presidential Plane. (SI/UN/ES) (RAS/MMB/LW/Naster)