To Meet the Needs, President Jokowi Encourage the Execution of Food Research Findings 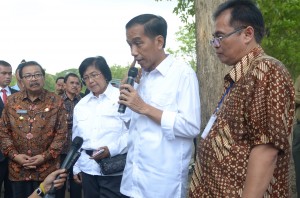 President Jokowi answered the questions of journalists, on the sidelines of his visit to the Research and Development Center (Puslitbang) Perhutani in Cepu, East Java, on Saturday (7/3)

In order to meet the national food needs, President Joko Widodo (Jokowi) encourages the use of unproductive land, belonging to the Ministry, SOEs, or Perhutani for crops or livestock as well.

“If this is implemented immediately, then the cattle affair which means entering into affairs of meats can be completed. If the matter of maize and upland rice are extended also, get on with it everything is done in lands that previously unproductive, then when combined with agricultural crops, this will increase the production of remarkable,” said President Jokowi, when reviewing the Research and Development Center of Perhutani in District Kasiman, Cepu, Bojonegoro, East Java, on Saturday (7/3).

President believes that the combination of state-owned companies with the ministry, then PTP for palm oil affairs, could be entered the cattle also the corns. “It’s a combination that has never been implemented on a large scale. This is what we are going to build and develop “, he explained. 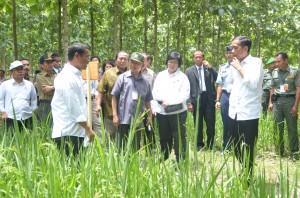 Related to this, the President Jokowi also, affirmed the need for the courage of the state to execute a study that has been trialed in the field at the same time has been calculated the results of each crop and the cropping areas.

According to Jokowi, currently the country has the opportunity and the chance to develop the products that have been trialed in the field. However, not expanded massively. In fact, it was clear the count and calculations, but do not dare to be implemented widely.

During this time, Jokowi further conveys that dairy farms around the forest were feared, because it would damage the new stands crops. However, the results of research and studies conducted by the Research and Development Center of Perhutani, now they not need to worry anymore. “Researchers have made a practice through mounds around the teak stands plant, so the cattle or goats could not spoil, even the feces became fertilizer for the plants,” Jokowi said.