To Overcome the Smoke Disaster, President Jokowi: We Will Buy at Least 3 Special Aircraft 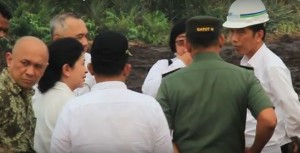 With so many fire point that occur in smoke disaster this year, prompting the government to plan to purchase special plane for the disaster, in the coming budget year. In addition, it can be used to extinguish the fire in case land and forest fires, these aircraft can also be used to transport relief goods in case of a disaster in an area.

President Joko Widodo (Jokowi) confirms, of course, the government does not expect a disaster smoke happen again in the future. But because our country is in the “ring of fire”, therefore it demanded to always have a disaster preparedness, because when a disaster occurs cannot be predicted.

“We are planning to buy a special aircraft for disaster relief next year,” President Jokowi said, when reviewing the location of land and forest fires in the Rimbo Panjang Village, Tambang District, Kampar Regency, Riau, Friday (9/10) yesterday.

Seemed accompanied the President Jokowi during the visit were the Minister of Environment and Forestry Siti Nurbaya, Minister for Rural, PDT, and Transmigration Marwan Jafar, Chief Staff of President Teten Masduki, and the TNI Commander Gen. Gatot Nurmantyo.   (TKP/ES)