To Prevent Fish Stealing, President Orders Financial Minister to Buy Patrol Boats as Many as Possible 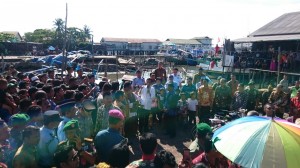 To Prevent Fish Stealing, President Orders Financial Minister to Buy Patrol Boats as Many as Possible

President Joko Widodo (Jokowi) has ordered Financial Minister Bambang Brodjonegoro to buy patrol boats as many as possible for the next year.

President also urged Minister of Marine and Fisheries Susi Pudjiastuti, Chief of Navy Admiral Marsetio, Water Police, and all regional head to secure marine resources that belong to the country.

I am upset since I have been told that every evening there are parties of fish catching by hundreds of boats, thousands of boats. At this time, there are only 30 boats arrested, it is still a low number. But hopefully, there is no more boat arrested because they are afraid to come in, President Jokowi said it in his speech at 14th Nusantara Day in Siring Laut, Kotabaru, South Borneo, on Monday.

According to President Jokowi, the patrol boats are necessary since the existing patrol boats in the Minister of Marine and Fisheries are not adequate anymore and they are not equipped with monitoring system.

The patrol boats are prepared. By the monitoring system, we are able to know where the boats are and how many they are. Therefore, we can just chase them when they enter our waters. Catch it, drawn it, Jokowi said.

President Jokowi also revealed that the Archipelago Day of Djoeanda Declaration was established in December 13, 1957, considering that our marine resources are so huge.

There are 5000 until 7000 boats in Indonesian waters and almost 90% of them are illegal, and we just let them in years. Do not let it happen anymore in my reign, Jokowi urged it. Then he said that because of the illegal fishing, Indonesia lose IDR 300 trillion per year.

According to President Jokowi, the Archipelago Day reminds us as the nautical nation and biggest archipelago country in the world.

This is a moment to change our point of views over the sea. The victory of the archipelago in the past was started from the sea, whether in Sriwijaya time or Majapahit time. We have to believe that our futures are in the as well, President Jokowi uttered.

For that reason, President emphasized the importance of guarding the sovereignty of waters area, President believed that outsiders start to consider Indonesia.