To Prevent Inflation, President Joko Widodo Reminds Minister of Trade and Minister of Agriculture to Maintain the Price 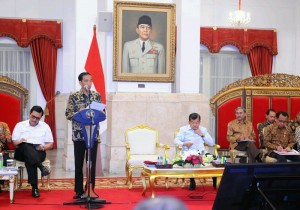 President Joko Widodo when delivering an introduction at plenary cabinet meeting at the State Palace, Jakarta (4/1)

President Joko Widodo reminded Minister of Trade and Minister of Agriculture, as well as the State Logistics Agency (Bulog) to pay attention to the things related with the price at the market, same as what they havedone in 2015.

We must monitor the market so that this years inflation rate will not be so much different from 2015. If there is lack of supply or market distortion, we must solve the problem as soon as possible, the President asked when delivering an introduction at a plenary cabinet meeting, at the State Palace, Jakarta, on Monday (4/1) afternoon.

The President expressed his gratitude because the 2015 inflation rate was approximately 3.3 percent whereas economic growth was about 4.7 to 4.8 percent. Compared to other countries, it is very good, since the rate in other countries decreased 1.5, 2, even 3 percent compared to the previous year.

Regarding the budget realization or absorption, according to the President, it is clear that our realization is not like what have been described by the analysts who said that the figure will be under 80 percent. I think it is far from that. The realization of our state expenditure was at 91.2 percent or Rp 1,810 trillion. Alhamdulillah, it is very good, the President said.

The state revenue, the President added, was 84.7 percent or Rp 1,491 trillion which includes 83 percent tax revenue and 93.8 percent non-tax revenue. It is very good because it means that our deficit was at 2.8 percent and we still have Rp 10.8 trillion unused funds (SILPA), the President explained.