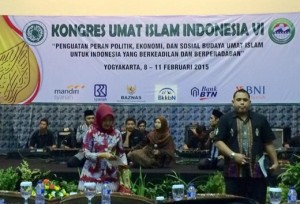 The atmosphere of the VI Indonesian Muslims Congress, in Yogyakarta, 8-11 Fabruari 2015.

Five-yearly congress with the theme of “Strengthening the Role of Political, Economic, and Cultural Muslims to Indonesia Which Equitable and Civilized as a Manifestation Commitment of Muslims to the Homeland (NKRI) Based on Pancasila” that took place since Monday (9/2), and opened by the Vice President (Vice President) Jusuf Kalla.

The participants came from the Indonesian Ulema Council (MUI), the representative of Islamic organizations at the national level, boarding schools, colleges, institutions of Islamic from domestic and foreign, professionals and individual figures. For the first time that KUII attended by 42 sultans throughout the Nusantara, including Sultan Iskandar Mahmud Badaruddin of Palembang.

President Jokowi will not to linger visiting Yogyakarta this time, because in the afternoon a number of events already awaits his presence in Jakarta.

At least two agendas had to wait for President Jokowi in Jakarta, on Wednesday (11/2), namely receives Chairman of the Presidential Advisory Council (Wantimpres) Siti Adiningsih, and lead Limited Meeting on Prevention of flooding in Jakarta.

Limited meeting on flood prevention will be held at the State Palace, Jakarta, and will be attended by the Minister of Home Affairs Tjahjo Kumolo, Minister of Public Works and Public Housing Hadimuljono Basuki, Minister of Environment and Forestry Siti Nurbaya, Governor of Jakarta Basuki Tjahaja Purnama or Ahok, Governor of West Java Ahmad Heryawan, Acting Governor of Banten Rano Karno, Mayor of Bogor Bima Arya, and Acting. Regent of Bogor.