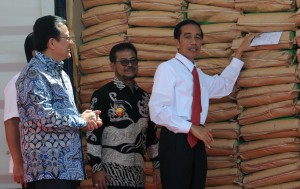 President Jokowi when performing export release in Makassar, South Sulawesi, some time ago

President Joko Widodo (Jokowi) will launch the economic policy package on Wednesday (9/9) in an attempt stability of the domestic economy amid the global economic pressures.

“The purpose of this policy is not only in the form of stimulus for the business world, but also can directly benefit the people, especially to the low-income,” wrote President Jokowi in the facebook fan page uploaded a few moments ago.

Jokowi President explained, today we still are in a global economic pressure. He assessed, this is not an easy matter, and cannot be solved by ordinary means.

Therefore, the President Jokowi invites all parties to work together in building a new economic engine of Indonesia, which can be perceived by all.

Previous Coordinating Minister for Economic, Darmin  Nasution said, the economic policy package, which will be announced on Wednesday (9/9) includes four (4) sectors. In addition, the sake of economic stability, this package is also expected to stimulate the growth of the processing industry, the concession of incentives for businesses, and maintain purchasing power.

The fourth group of the policy packages, Darmin said, will be related to fiscal and financial policy, deregulation of investment-related regulations in the industrial and trade sector, incentives for accelerated development of mineral processing installations as well as the handling of food.

The intended target of the four formulas of this policy, according Darmin namely, the stability of the domestic economy amid global economic pressures, the growth of the processing industry, the concession of incentives for businesses, and maintain purchasing power.

One of the policies of the real sector is the provision of rice for the poor (13th and 14th), as an effort to address the problem of food needs for the poor during a famine.

While the policy package related to the fiscal and finance, previously, Nasution said it would issue a six or seven-point policy of which contains rules on the foreign ownership in the property sector, and setting the debt-to-equity ratio.

Meanwhile, the core of the publication of the deregulation policy is to examine regulation legislation that still hamper the investment in the fields of industry and trade, including the energy sector.

“There were amended in part, there are in total, it concerns approximately 160 regulations. There are also simplified the rules,” Darmin said. (WID/ES)/Sy.