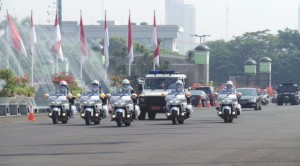 At 10:00 to 10:45 a.m, the President was scheduled to open the XV National Conference HIPMI. Afterward at 10:50 a.m, President Jokowi accompanied by the Governor of West Java leaving for Industrial Center of Binong Jati, Jalan Gatsu, Bandung.

After lunch At 14:00 am, the President and entourage paid a visit to Silicon Valley in PT Telkom Palasari Bojong Soang, Bandung Regency, then headed to H. Ma’soem house in Rancaekek.

Closes the visit, President and the entourage will visit the PT DI (Indonesian Aerospace) on Jl. Pajajaran and then at 17:00 return to Jakarta. President Jokowi estimated to have arrived at the Wisma Negara Jakarta at 19:20 am.