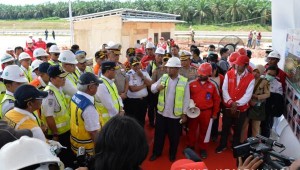 In a bid to provide convenience ahead of this years mudik (an annual exodus ahead of Eid al Fitr), the Government starts to operate toll roads connecting Bakauheni in Lampung and Palembang in South Sumatra. Previously, President Jokowi has already inaugurated the opening of the Bakauheni-Terbanggi Besar toll road last March.

“Toll roads connecting Terbanggi Besar and Palembang will be operated functionally on May 29,” Minister of Transportation Budi Karya Sumadi said when inspecting the construction of toll road with a number of Government officials on Saturday (11/5).

According to the Minister, the Terbanggi Besar – Palembang toll road to operate on 29 May for 13 days, only by day from 6 a.m to 6 p.m Western Indonesian Time (WIB) due to lack of road signs, road lighting, and rest areas.

The Government will also coordinate with relevant stakeholders in order to improve toll road rest areas so that travelers can fill their gas, as well as buy food and drink.

In addition, there will be three temporary rest areas along the Terbanggi Tinggi – Palembang toll road that stretches about 200 km.

Budi said that travelers need to pay attention to the operation of the functional toll road, since the traffic in toll roads spanning from Pematang Panggang to Kayu Agung can only move in a single direction. He further said that in order to anticipate vehicle density on the ground, the Government will implement traffic diversion policy to the national road, namely the Trans-Sumatra road.

Budi went on to say that regarding the safety aspect, all cars passing through the functional toll road should comply with the 40km/hr maximum speed.

In the meantime, Minister of Public Works and Public Housing Basuki Hadimuljono said that there was a problem in Sodong Bridge which is part of Terbanggi Besar  Palembang toll road. However, the Ministry has successfully solved the problem so that the roll road can be operated functionally.

“The problem was solved, and we will monitor the bridge from the air. The road that connects to Jakabaring, Palembang has also completed. I hope this project will assist the travelers to be able to use Bakauheni-Jakabaring Palembang toll road for this years mudik,” Basuki said.

The Minister of Transportation appreciated the PUPR Minister’s hard works for developing toll roads connecting Lampung and Palembang that will cut travel time from 12 hours to only 7 hours. In the meantime, Head of Traffic Corps, Inspector General Refdi Andri ensured that there would be no one-way traffic system like on trans-Java toll road.

“There will not be one-way traffic for Sumatra because the volume of vehicles is proportional and the national roads across the East, Central and West Sumatra can be utilized properly,” Inspector General Refdi Andri said. (PR of Ministry of Transportation / ES)