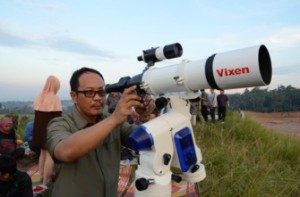 Tomorrow, Ministry of Religious Affairs Held an Ithbat Session to Determine the Beginning of Ramadhan

Minister of Religion, Lukman Hakim Saifuddin said, in the session of ithbat, Ministry of Religious Affairs will invite the ulema, mass organizations leaders, as well as astronomers to participate.

“The beginning of fasting of Ramadan will be determined based on the results of session of ithbat which will be held on Tuesday, 16th June. Highly dependent on ithbat session,” said Minister of Religious Affairs told reporters in Semarang, Central Java, on Saturday (13/6).

Ithbat session itself will be preceded by monitoring of the new moon (hilal rukyatul) at the points of monitoring, which is spread across in several regions of Indonesia.

“In the ithbat session, it will be determined whether the moon could be seen or not. If its seen, Ramadan will fall on Wednesday (17/6). If the moon is not visible, the month of Sha’ban will be istikmal (fulfilled) to 30 days and Ramadhan falls on Thursday (18/6),” Lukman said.

Meanwhile, Director General of Islamic Cummunity Guidance, Machasin argued that the  ithbat session determination 1 Ramadan will be held on Tuesday (16/6) at 16:00 pm, beginning with the exposure from the Agency of Hisab and Rukyat, Ministry of Religious Affairs, about the position before the beginning of the new moon of Ramadan 1436 H. While the process of the itsbat session is scheduled to be held after Maghrib prayer, after reports rukyatul hilal results from the monitoring locations in throughout of Indonesia.  (Humas Kemenag/ES)