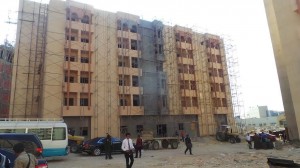 President Susilo Bambang Yudhoyono (SBY) is scheduled to officially open the Indonesian student accommodation which is stood inside the complex of Al Azhar University, Cairo  Egypt, in Jakarta on Friday (3/10) in Jakarta. The opening of the dormitory, which is consist of six buildings, would be marked by the signing of obelisk at the Istana Negara (state palace), Jakarta. After that, the obelisk is brought to Cairo, then placed in front of the building.

Previously, during his visit to Egypt in February of 2013, President SBY visited Al Azhar  Kairo to see the construction process, and met thousands of Indonesian student there. After back in homeland, the President presented the result of his visit in front of members of cabinet plenary meeting at Istana Negara, on February 18th, Monday last year. Alhamdulillah, the accommodation for our student is in a strategic location, closer to the rectorate office, said the President at that time.

According to President SBY, after listening to what has been said by the Head of Al Azhar, he believe that Al Azhar has commitment in educating and preparing leaders, that is not just Islamic but also tolerant and love in peace. I feel peace and calm hearing the explanation, because it has great meaning, said President.

President SBY adds, thousands Indonesian students come to Middle East in every year to study, and they are expected to be professionals, leaders, religious figures who uphold religious value here when they finish study. They can give example about to live side by side by others peacefully, said President.

The building is consist of six floors, and only the first building would have basement. First until fifth floor would have 15 rooms, while ground floor would be utilized for office, library, study room and others. (Humas Kemdikbud/ES)(Ifp)