Total Assets of SOEs Rp 4,500 Trillion, President Jokowi: We Should Do Something Immediately 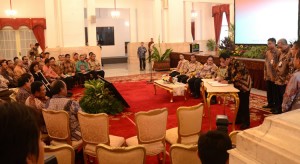 After the consultation meeting with the leadership of the House of Representatives (DPR), President Joko Widodo provide direction to the Director General of State Owned Enterprises (SOEs), at the State Palace, Jakarta, Monday (18/5) afternoon.

“In this afternoon I would like to meet, because I want to give some idea of the desires of the next five years by clearly to all of you, that we must to do something as soon as possible for our SOEs. Why it should be done? Because after I see the details of our latest state-owned assets worth Rp 4.500 trillion, this amount is very large,” Jokowi said in the early direction.

Minister of SOEs, Rini Soemarno previously expressed that the SOEs is holding transformation to be able to increase the value of the capital provided by the state  as much as   almost Rp 40 trillion.

“As the managing the state capital, the SOEs should be able to perform as an agent of development of the country,” Minister of SOEs affirmed.

On that occasion, President Jokowi also witnessed the signing of three MOUs between enterprises, consisting of:

–    MOU on Financing Port of Kuala Tanjung and Belawan by the Pelindo I, BNI, BRI and Bank Mandiri;

–    MOU on Labor Insurance by Jasindo with SOEs of construction that consists of Adhi Karya, Berantas Abipraya, Hutama, and housing development by Waskita Karya and Wijaya Karya;

The Managing Director of SOEs comes from SOEs are directly owned by the government, while the subsidiaries that are not present at this time, has reached 700 companies. (Humas Setkab/ES)