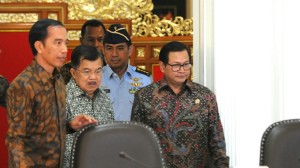 President Joko Jokowi Widodo said that amidst global economic slowdown, including whats currently happening to the Indonesian economy, tourism is the fastest sector that is able to boost the economy.

In his remarks on the limited meeting discussing program improvement for tourism development and infrastructure acceleration on transportation at the Presidential Palace, Jakarta, on Thursday (15/10) afternoon, President Jokowi said that according to the report that he has received, tourist arrival in August 2015 reached 850,000 tourists or increased by 2.87% as compared to the number in August 2014.

President Joko Widodo also said that the promotion of Indonesian tourism carried out by the Ministry of Tourism is really great.

I watch it on CNN. The content of the promotion is nice and probably they have done the same works in other television channels that I have not watched yet, President Widodo said.

According to the President,  tourism development in Indonesia lies on promotion and improvement of products on the ground.