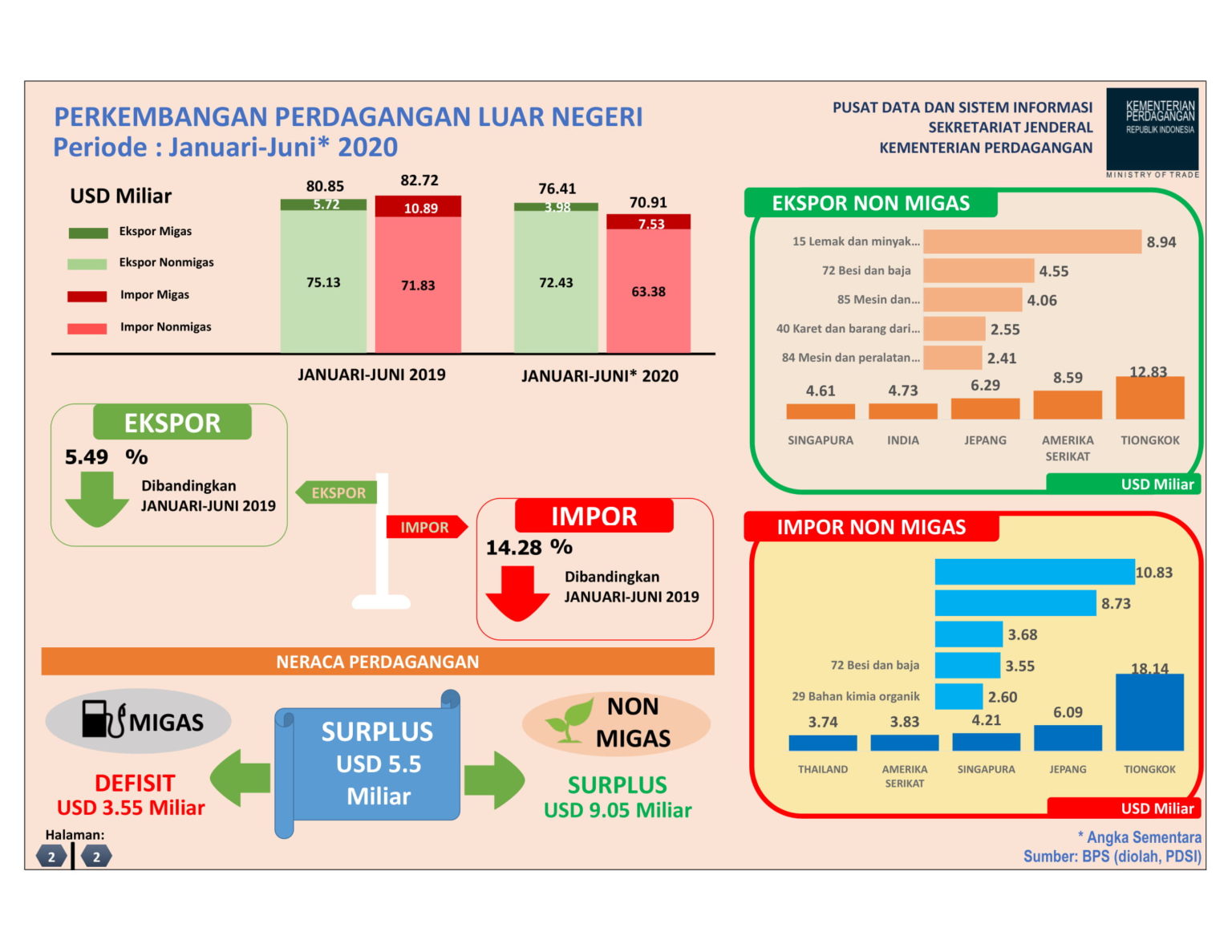 Development of Foreign Trade from January to June 2020. (Source: Ministry of Trade)

Indonesia’s trade balance in August 2020 experienced a surplus of US$2.3 billion, which is the third-highest achievement throughout 2020 after the trade surplus in July (US$ 3.2 billion) and February (US$ 2.5 billion), Minister of Trade Agus Suparmanto has said.

“The August 2020 trade balance was a surplus of US$2.3 billion. The weakening global demand put pressure on export performance in August 2020. However, the decline in export value that occurred was relatively low compared to the decrease in volume. Thus, this indicates that Indonesia’s export performance is still supported by relatively good global commodity prices. Apart from that, the trade balance surplus also helped the rupiah move to a positive level,” the Trade Minister explained.

“All of these indicate that Indonesia’s trade performance is still on the right track to support the improvement of national economic performance amidst global economic uncertainty due to the COVID-19 pandemic,” Agus said. According to him, the value of Indonesia’s exports in August 2020 was recorded at US$13.1 billion or decreased by 4.6% compared to the previous month (MoM). This decline mainly occurred in non-oil and gas exports, namely by 4.4% or US$0.6 billion.

“Exports of metal ore, slag, and ash (HS 26) are mostly directed to China. Based on the country of destination, non-oil and gas exports to the UK, Vietnam, Taiwan, Italy, and Thailand also increased significantly. Optimism and positive sentiment from the consumer side and business actors in several countries have encouraged an increase in business activity,” Agus said.

Cumulatively, the Minister said that the value of non-oil and gas exports from January to August 2020 has decreased by 4.4% compared to the January-August 2019 period (YoY). Meanwhile, the volume fell sharply to 11.7%. Indonesia’s export performance still benefited from the global commodity which maintained its prices. The average price of global non-energy commodity groups in the January-August 2020 period decreased by only 1.7% YoY. This is better than the price of the energy commodity group, which fell by 34.5% YoY.

Meanwhile, the Minister explained that Indonesia’s imports in August 2020 were recorded at US$10.7 billion or an increase of 2.6% compared to July 2020 (MoM). “The increase in imports in August was due to an increase in imports of the consumer goods and raw/auxiliary materials categories, which were respectively 7.3% and 5.0% MoM. Meanwhile, imports of capital goods have decreased by 8.8%,” he said.

According to the Minister, several raw/auxiliary materials that experienced an increase in August 2020 included gold (45.2%), steel (23.3%), cereals (30.4%), as well as plastics and plastic goods (7.9%). The increase in gold imports was due to higher gold and precious metal prices.

The price of gold in August 2020 was recorded to have increased by 6.6% compared to July 2020. Meanwhile, the increase in imports of cereals was in order to meet the raw material needs of the food and beverage processing industry. “The growth rate of the food and beverage processing industry sector in the second quarter of 2020 increased by 1.87% compared to the previous quarter, or an increase of 0.22% compared to the same quarter in 2019 (YoY),” Agus said.

Products that experienced the largest decline in imports during January-August 2020 include machinery and mechanical equipment (HS 84); iron and steel (HS 72); vehicle parts and components (HS 87); plastics and plastic goods (HS 39); and electric machines/appliances (HS 85). “The decline in vehicle imports was due to reduced demand as an impact of large-scale social restrictions (PSBB). Meanwhile, the decline in imports of iron and steel, as well as machinery/mechanical aircraft was the result of the termination of infrastructure projects during the COVID-19 pandemic,” the Minister concluded. (Ministry of Trade PR/EN)