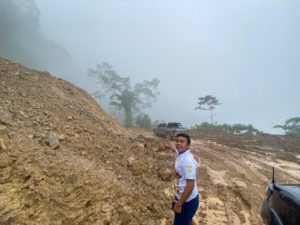 This infrastructure construction is one of the national strategic projects and part of the 2020-2024 medium-term national development plan.

“Since 2015, President Jokowi has pushed for the acceleration of infrastructure construction in the land of Papua by continuing to work on Trans-Papua road construction that is 3,462-kilometer long,” Special Staff to the President Billy Mambrasar said in his written statement, Friday (24/09).

“Connecting the provinces of Papua and West Papua also connects the whole cities, districts, and villages in every part of the land of Papua,” he added.

The native Papuan Special Staff to the President also stated that President Joko “Jokowi” Widodo has ordered him to directly inspect the development of the Trans-Papua road construction.

“To date, 3,446 kilometers of Trans-Papua road has been built and it will be continued along with the construction of schools, places of worship, cross-border posts (PLBN), and so on,” he said.

Furthermore, since June 2021, Billy and Bring a Change Team have made several visits to Papua, crossing the provinces of Papua and West Papua, 15 regencies, 66 districts, and 278 villages.

During this work visit, Billy not only inspected the progress of Trans-Papua road construction but also launched the Millennial Farmers program, inspected vaccination, met regional government officials, and received the people’s complaints to be delivered to the President.

“We all hope that Papua develops into other developed areas. Let us all work to realize it together,” Billy remarked. (Communication Team of Special Staff to the President Billy Mambrasar) (DH/MMB)