Trans-Papua Road Project is a Matter of Social Justice 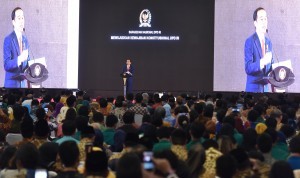 President Joko Jokowi Widodo admits that when he decides to build Trans-Papua Road, someone asked him whether the construction of the road will drive and develop economic growth in Papua. The President explains that there are two choices: the road is built first then the economy will grow or we wait the economy grows then builts the road. This explanation is delivered by the President when delivering his remarks at National Meeting of Indonesian Regional Representative Council (DPD RI) To Materialize Constitutional Obligations of Indonesian Regional Representative Council in 2017, at Nusantara IV Building, Jakarta, Friday (17/11) morning.

The President asserts that Trans-Papua is built to reduce the gap of infrastructure between regions in Indonesia. Therefore, the President asks the DPD RI to give support when the Government carries out development in the regions so in the future no one, especially from the DPD, would ask what is the purpose of this development.

The President admits that he feels sad when he visits Wamena and finds that the price of cement in this city as well as in Pegunungan Tengah is Rp800 thousand per bag. Even, when the weather is not good the price jumps to Rp1.5 million. In the meantime, the price in Java is only Rp70-80 thousand. Likewise, the price of fuel oil in Papua is Rp60 thousand and when the weather is not good it can reach Rp100 thousand per liter. In the meantime, in Java the price is only Rp6,450 per liter. The price disparity is exceptionally high, about ten times higher compared to Java.

The President then orders the Minister of State-Owned Enterprises to lower the price of fuel oil in Papua, particularly in Pegunungan Tengah and Wamena to be the same with Java. After 1.5 years, this price gap problem is solved.

President Jokowi firmly says that is not a matter of economy, instead it is a matter of social justice for all Indonesian people. At the moment, the price of cement is also lower than before. Although, the price in Papua is not the same with the normal price in Java, the President believes that when Trans-Papua project is completed and cement can be transported by road instead of air, the price can be lowered close to the price in Java.

Therefore, the President asks DPD RI to support the Governments agenda to build road, border post, and dams in the regions.