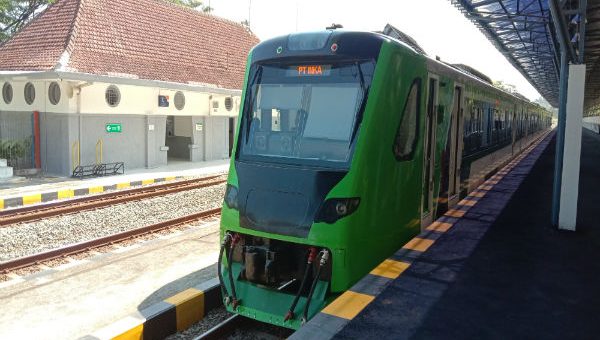 Ministry of Transportation has announced that as of March, construction progress of a 5.3-kilometer elevated airport railway connecting Kedundang Station-Yogyakarta International Airport Station has reached 83.6 percent.

The railway lane with an investment value of Rp1.1 trillion was built on a multi-year basis. The construction has begun in December 2019 and is expected to be completed in mid-year. In July 2021, a series of trials will be carried out. The railway is projected to operate in August 2021.

According to Minister of Transportation Budi Karya Sumadi, the construction of the airport train is an integral part of the Yogyakarta International Airport (YIA), considering that the airport serves as an international airport that can accommodate large aircrafts and as the center of passenger movement from within the country and abroad so that it must have great integration between transport modes.

“The YIA can accommodate around 20 million passengers per year, so it must have great intermodal connectivity via the airport train connecting Tugu Yogyakarta (Yogyakarta Monument) Station-YIA Kulon Progo Airport,” the Minister said after inspecting the construction progress, Friday (12/3).

The Minister went on to say that the development of the airport railway was also carried out to boost the tourism sector. “This effort aims to support Borobudur as a priority tourist destination. People will find it more comfortable using the airport train,” he said.

For the record, there will be 24 airport train trips per day from Tugu Yogyakarta-YIA Station along 40.23 kilometers using 4 train sets of a diesel-electric train (KRDE) with a capacity of up to 4,800 passengers per day.

In the meantime, the waiting time for passengers is around 30 minutes for each train arrivals (headway). From Tugu Yogyakarta Station, the airport train route will stop at two stations, namely Wates Station and Yogyakarta International Airport Station.

The maximum train speed can reach 80 kilometers per hour with a travel time of about 45 minutes, faster than the approximate one to two hour highway service.

On the same occasion, the Minister also inspected the labor-intensive program for the construction of a 310-meter long access road in the Kaligintung Residential Area, which is affected by the construction of the airport train. The program employs a workforce of around 400 local residents. (PR of Transportation Ministry/UN) (RIF/MUR)