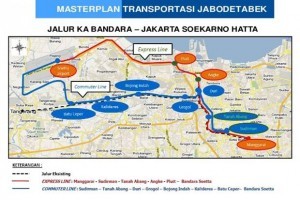 In the meantime, the project in sea transport is the construction of Kuala Tanjung Port, whereas the projects or air transport are the constructions of Karawang and Bali Baru Airports, the Minister said when giving a briefing at the 2016 Ministry of Transportation Working Meeting at the Head Office of the Ministry of Transportation, Jakarta, on Wednesday (16/11).

Moreover, to increase investment in infrastructures development, the Ministry also establishes cooperation in using goods belonging to the state to optimize the efficiency of the goods and increase state revenue as regulated in the Regulation of the Minister of Finance Number 78/PMK.06/2014 on the Procedures of the Usage of Goods Belonging to the State.

In air transport sector, the Minister added, there are five airports, namely, Samarinda Baru, Hananjoedin, Kalimarau, Radin Inten II, and Juwata that are currently in a process to be able to cooperate with PT Angkasa Pura I and II.

At the beginning of his briefing, Minister Budi Karya Sumadi explained that the projects are offered to private parties because the Government wants to accelerate the construction as well as development of transportation infrastructure. So, the Government should not depend only on the State Budget. Hence, the Ministry of Transportation increase the roles of private parties and State-Owned Enterprises in the development of transportation sector,the Minister said.

Based on the National Medium-Term Development Plan 2015-2019, the Minister explained, the development of transportation sector needs Rp1,823 trillion, while the budget allocated in the State Budget is only Rp491 trillion.

Therefore, the Minister added, to solve this issue, the Government tries to extend the movement space of fiscal by increasing tax revenue and Non-Tax State Revenue as well as increasing the roles of State-Owned Enterprises and private parties.

The Minister explained that there are obsctacles that must be faced by the Government in promoting Government and Private Cooperation (KPS). They are, among others, land acquisition process, inability of private sector to involve in investment risks of the offered projects, and non-optimal support from the stakeholders to allow bigger roles in KPS projects.

The Team has been formed and we will include competent parties so that the plan, development or implementation can be in accordance with the professional business entities, the Minister said. (PKP Kemenhub/ES)(MMB/YM/Naster)