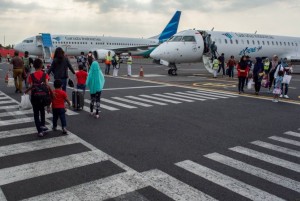 According to the Minister, the adjusted regulation will take effect on 18 May 2019. “Airlines must follow the regulation,” he said in a statement (17/5).

The policy, the Minister added, was made after an evaluation of airfare which according to the passengers is too expensive even though the airfare did not violate the price ceiling stipulated by Ministry of Transportation.

“After we conducted the evaluation, it turned out that the airfare was not affordable for the public. We received many complaints from the public, tourism sector, and hospitality sector,” Budi said.

The Minister also revealed that the price ceiling policy has been discussed with Coordinating Minister for the Economy, the relevant stakeholders such as Ministry of State-Owned Enterprises, airlines, and other stakeholders.

“The best move is to adjust the price ceiling,” he said, adding that the airlines should adjust to the regulation and provide more affordable prices.

Budi also expressed hope that airlines would also give a choice to the public by providing airfares which are priced 50-80% of the price ceiling.

Previously, Director General of Civil Aviation Polana B. Pramesti has said that the amendment to the Minister of Transportation’s Decree on the price ceiling adjustments aims to meet public demand while also taking into account sustainability of the aviation industry, especially ahead of the 2019 annual exodus in the Eid Day holiday.

According to Polana, the 12-16% price ceiling reduction has taken into account substantial factors such as safety and security.

The increasingly good On-Time Performance (OTP) factor from the airlines, she added, was also one of the factors considered in making the decision on adjusting the price ceiling.

Polana further said that the airfares are volatile because they are influenced by many factors such as flight operating costs, passenger service charger, flight navigation services, taxes, insurance, and others. Some of these components are strongly affected by currency exchange rates, she added. (Ministry of Transportation PR/ES)