Tsunami Detectors to be Guarded by TNI 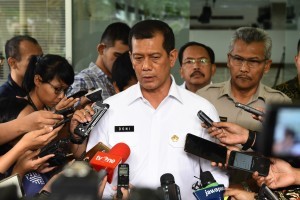 Most existing tsunami detectors are not functioning, according to Head of the National Disaster Management Agency (BNPB) Lieutenant General Doni Monardo.

He added that some parts of the detectors are lost and some of them are nonfunctional due to the absence of batteries or solar cells.

Ive reported this issue to President (Joko Jokowi Widodo) and I propose to him to include the devices as National Vital Objects so that the TNI (Indonesian National Defence Forces) can secure them, Doni told reporters after attending a Limited Cabinet Meeting at the Presidential Office, Jakarta on Monday (14/1).

Doni added if the devices are nonfunctional, it would endanger the residents in the coastal area and if tsunamis occur, more lives would be lost.

If no one guards the devices, no matter how many of them are installed, they will be lost due to natural and human factors, he said.

The President has ordered the TNI Commander to issue a warrant so that these devices are guarded by the TNI personnel, Doni added.

According to experts, there are 2 places prone to the tsunami. The first is the megathrust area from the Sunda Strait up to the southeastern region of Java. The second is the megathrust area in the western part of Sumatra Island, including a number of faults in Java which are densely populated, Doni said, adding that the BNPB will continue to work together with experts to find a definite and exact location to install the warning signs.

Doni also stated that the BNPB will cooperate with the provincial government/municipalities to provide the warning signs. He added that the BNPB will repair the existing devices if they can be repaired and will also install devices on the area based on expert recommendations.

The meeting has decided that the device installation will be carried out in a maximum of three months, Doni said. (RSF/MAY/JAY/ES)