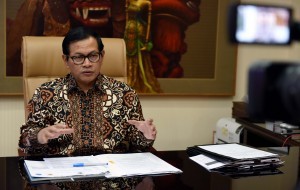 Having made improvements in the field of laws and regulations, particularly matters relating to economic policy within the first two years of administration, President Joko Jokowi Widodo and Vice President Jusuf Kalla focus its efforts on law reform or revitalization as the Governments next target.

“Well, from now on, the President begins to focus on the reform and revitalization of the law,” Cabinet Secretary Pramono Anung said in an interview regarding two years of Jokowi  JK administration in his office, 2nd Floor of Building III of the Ministry of State Secretariat (Kemensetneg) last weekend.

The focus on legal reform, Cabinet Secretary further explained, is carried out to maintain the achievements in economics, given a tremendous public trust, and the high expectations of global investors. “It is expected that issues of smuggling, extortion, uncertainty do not prevail at home,” he asserted.

As reported previously, in the first two years, President Jokowi puts priority to three things. They, among others, are infrastructure development, deregulation and de-bureaucratization in the field of economic policy and capacity building.

Cabinet Secretary emphasized that within these five years, the President has also laid the foundation for the long run by focusing on the effort to organize the infrastructure, make improvements in the field of laws and regulation, and more importantly build cultures.

In response to tough competition among countries worldwide, Cabinet Secretary Pramono Anung emphasized that Indonesia should not shy away from competition.