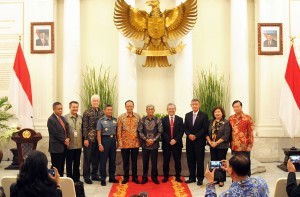 Office of Special Envoy of Indonesian President on the Establishment of Maritime Border between Indonesia-Malaysia (UKP PBM), collaborating with the Ministry of Foreign Affairs holds Internatioal Symposium to Commemorate 60th Year of Djuanda Declaration, at Pancasila Building, Jakarta, Wednesday (13/12) morning.

In his keynote speech, Deputy Minister of Foreign Affairs A. M. Fachir says that Djuanda Declaration which was launched by the Prime Minister of Indonesia (at that time) Djuanda Kartawidjaja on 13 Desember 1957, stated to the world the entirety of the land and sea between Indonesian islands as the definite jurisdiction of the Unitary State of the Republic of Indonesia (NKRI). This declaration defends the national interest and at the same time it has been recognized by international world as one of basic principles of the law of the sea.<>

Djuanda Declaration has opened the way to further develop the vision of maritime sector and Indonesias need as global maritime fulcrum, A. M. Fachir says.

Global maritime fulcrum can be defined as the vision of Indonesia to be a sovereign, strong, and independent maritime country that can give positive contribution to create peace and territorial security. It needs to be implemented together and needs to cooperate with other ministries as well as related parties.

Therefore, the Deputy Minister of Foreign Affairs hopes this Symposium shall generate initiatives as well as new ideas to use Djuanda Declaration to accelerate the implementation of territorial connectivity.

Previously, Director General for Legal Affairs and International Treaties of Indonesian Ministry of Foreign Affairs, Dr. iur. Damos Agusman, in his remarks, affirms that in line with President Joko Widodos instruction in strengthening maritime diplomacy, this Symposium aims to formulate policy options. Thus, a number of national and international legal luminaries whose areas focusing on maritime law are invited to this event.

Another aim of this event is to remind Indonesias community, not only the diplomats, but also legal practitioners and  academics, that the Indonesian Government has performed maritime diplomacy for decades, Damos says.