Unify of Indonesia, President Jokowi Asks the Ports in the West and the East Should has the Same Level 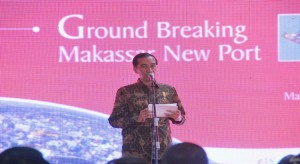 Unify of Indonesia, President Jokowi Asks the Ports in the West and the East Should has the Same Level

Related with the construction of the port in the number of areas in Indonesia, which is a series of government efforts to realize the marine toll lanes, President Joko Widodo (Jokowi) reminds that the ports development should be at the same level, both in West and East Indonesia.

“If the construction of the ports are not in the one level position, then the ships cannot be anchored, for example, a good harbor, just in Tanjung Priok and Tanjung Perak, so that the large ships could only lean on two ports, of course it does not mean anything,” said President Jokowi told to reporters that intercepted at Hasanuddin Airport, Makassar, when going back to Jakarta, Friday (22/5) night.

Therefore, President Jokowi continued, the ports that provided starting from west, central and east should be the same. Size and facilities are also identical, so it will be operated within one (1) system, can enter from anywhere. “Other countries also use the system such as it, there is transportation system, logistics system which is controlled within 1 (one) point, so that later the transport costs and logistics costs will go down,” Jokowi said.

The President believes, if it could be realized, then it could be seen for 3-4 years would be like that, so the prices in the community of all will be low, because so far our transportation costs are very expensive of about 2-3 x higher than our neighboring countries

“If all is online moreover in the one place, one room, for example, there is one ships sailing from Kuala Tanjung, how much container the contents, e.g. 1 container freight fell 20-30 in Jakarta, how many have been intercepted here to fill another container. And so on until in Sorong so do not wait until the lean ships for several days, so all should be clear systemization,” Jokowi said.

President targeted that by July will begin in Sorong, Papua. Here there will be a ship for transfer to another island in the province.

Regarding the number, how many big ports that will be built, according to President Jokowi, the big ports which includes Sorong, Makassar, Tanjung Perak, Tanjung Priok, Kuala Tanjung, and other provinces. “All the same, it is also all the same standard,” Jokowi said. (Humas Setkab/ES)