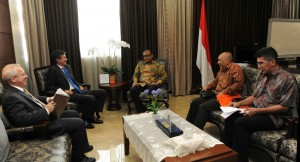 During the meeting was discussed about several things, one of issues that was discussed is the Indonesian stance on the case of Rohingya refugees from Myanmar. Cabinet Secretary, Andi Widjajanto explained that in the meetings with the chairmen of state institutions as well as the cabinet meeting held on Monday (18/5), President of Joko Widodo (Jokowi) also alludes the the Rohingya refugee issues.

On that occasion the US Ambassador, Blake Ribert appreciate the work program of Jokowi-JK government, both in the field of maritime, fisheries, defense, energy, in particular the construction of power plant of 35,000 MW.

Blake also appreciates the Indonesian government’s efforts in realizing national security, either by preventing cyber-terrorism. While the issues that asked by Blake is the plan to hold local elections (Pilkada) in simultaneously.

Related with the local elections that will be held this year, Cabinet Secretary, Andi Widjajanto asserted that President Jokowi wants qualified and peaceful local elections.

The US Ambassador also appreciated the use of social media, that conducted by the government. Through social media is expected to communicate with the public could be established as well as good governance could be realized.

Cabinet Secretary, Andi Widjajanto explained, this year President Jokowi wants to focus on building system in order the wheels of government could running with clean, transparent, and stable.