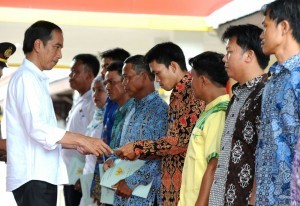 President Joko Jokowi Widodo in his visit to Entikong, Sanggau Regency, West Kalimantan, on Wednesday (21/12), attended the handover of 525 Land Certificates for 2016 Strategic Program to representatives of local residents of Sanggau, Sekadau, Melawi, and Sintang Regencies.

In his remarks, President Jokowi mentioned that there are 6.4 million hectares of non-forestry land in West Kalimantan. However, only 2 million or 32 percent of the total land that have been certified. Around 68 percent have not, the President said.

Therefore, President Jokowi instructed the National Land Agency (BPN) both at regional or regency levels to address this problem immediately. That is the tasks for BPN, namely to identify the problems, the President added.

President Jokowi has given target to Minister of Agrarian and Spatial Planning to issue at least 5 million certificates in 2017, 7 million in 2018, and 9 million in 2019. Thus, the total certificates handed by the end of 2019 is expected to reach 25 million.

According to President Jokowi, legal rights for the certified land will be clear, so the owner should know precisely the land area and its location.