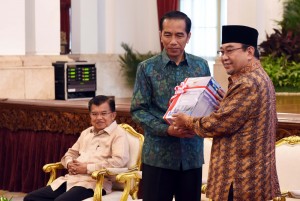 I need to mention four government institutions that received disclaimer opinion thus next year they will improve their performance. They are Ministry of Social Affairs, Ministry of Youth and Sports, state-owned broadcasting company TVRI and National Commission on Human Rights (Komnas HAM). These four institutions should be noted, President Jokowi said in his remarks.

Responding to the BPKs financial audit reports, the point is not about the predicate that the institutions received, but they should take the reports as a momentum to improve their performance and improve the state financial accountability, the President added.

We need to work harder because the essence of transparency and accountability is a moral responsibility towards the constitution and the people, President Jokowi said.

The President also instructed institutions to follow up on the BPK’s recommendations in the 2015 reports as soon as possible.

I hope the recommendations can be followed up immediately because there are several recommendations from last year that have not been implemented yet, the President said.

Do not play around with the people’s money, the President said.