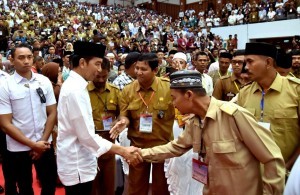 Use of village funds must be well-targetted and according to the needs, President Joko Jokowi Widodo has said.

Disbursement of village funds has to date reached Rp187 trillion and they must be well-targeted to meet the needs of villages, the President said in his remarks at the Dissemination of Priority on the Use of 2019 Village Fund, at the Academic Activity Center (AAC) Building Prof. Dr. Dayan Dawood, Syiah Kuala University, Aceh Province, Friday (14/12).

The President added that village officials may use the village funds to build reservoirs, roads, bridges, as well as to provide social services such as integrated health service posts (posyandu).

Please ensure that what we build has great benefits for our people in the village. Dont build something that are not useful, the President said.

According to the President, money is mostly circulated more in the cities, 60 percent of which is circulated in Jakarta alone.

We disburse village funds so that the money will flow back to the villages and rural areas. Therefore, if you build irrigation systems or roads, you should buy the sand in that village or in the next village, or in the sub-district. Dont let the money circulate in Jakarta, the President said.

The President also mentioned several progress in infrastructure development since the village funds were disbursed in 2015 until August 2018, including the construction of 158,000 kilometers of village roads and 1.02 million meters of bridges, as well as 48,600 Early Childhood Education (PAUD).

This means that village funds have improved our villages, so I hope that cooperation between facilitators and recipients of village funds will continue. The community should get involved in the deliberation on the use of village funds, the President concluded. (Bureau of Press, Media, and Information/EN)