Beginning the Year 2015, President Jokowi Promises, the State Will Always Exist for the People 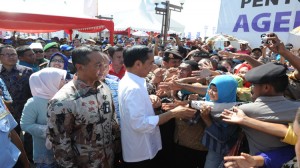 Venturing the Year 2015, President Jokowi Promises, the State Will Always Exist for the People

President Joko Widodo (Jokowi) to greet all the people of Indonesia on Thursday (1/1) morning in the new year 2015. “Good morning my Nation – Indonesia. Happy New Year 2015” wrote Jokowi on the facebook fan page, which is uploaded on Thursday (1/1) at 7:52 a.m.

While a few moments later, President Jokowi emphasized that the State should exist in every tussle daily in the lives of the people.

“The state will always exist and help when disaster comes, when problems arise in society, and the state must exist in the daily tussle, so that the people are not left alone and the people felt that the state exists to ensure the mobility in the life,” wrote President.

Jokowi admitted that he learned a lot about constitutional philosophy from Sri Sultan Hamengkubuwono IX, the philosophy of “the Throne of the People”, which is believed to the power and that power grows from the love of the people, because the leader always exist to help in every problems of the people.

“May the Indonesian nation get the prosperity because of the unity between the leader and the people.,” Wrote Jokowi on the facebook fanpage.