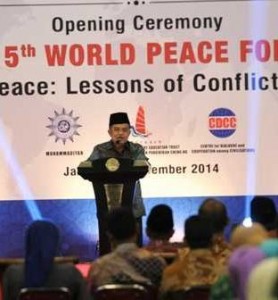 VP Jusuf Kalla in Anniversary of Muhammadiyah in Jakarta

Vice President (VP) Jusuf Kalla expressed his proudness as an Indonesian that we could enjoy a safe and peaceful country compared to other countries.

When delivering his speech in the celebration of 102nd Muhammadiyah Anniversary and opening World Peace Forum in MPR Building Jakarta, on Thursday evening (20/11), VP Jusuf Kalla (JK) compared Indonesia to some Islamic countries in the world which were full of bombs, fights, and big conflicts which surely tormented its people.

We are proud as a country with the biggest Muslim population; we can run the government safely and democratically. In contrast to other countries in which elections means fight, kill and shoot at each other, VP continued.

It means if we wish to bring life in peace, what matters the most is maintaining state justice among its people and regions, VP said.

VP underlined that it was very important to maintain the states prosperity and progress as poverty could cause inequity and lead to conflict.

In the opportunity, VP stated firmly that all religions had the same goal and principle which was keeping peace. We said greeting every day, Assalamualaikum for Muslims, Shalom for Chirstians, Om Swastiastu for Hindus.

All of the greetings wish goodness for us all, VP said.

Yet, religion conflict still occurred even though the greeting taught in all religions wishing goodness of everyone.

VP also reminded us that peace could not only be reached through having discussion, but also with acting fairly and prospering the country, VP said.

Chairman of Muhammadiyah Din Syamsuddin said that the 102nd Muhammadiyah anniversary or 105th anniversary according to Hijrah Year was coupled with 5th World Peace Forum. Many people attending this forum come from different background, such as religion leaders, intellectuals, academics, politicians, businessmen, peace activists, and media from various countries, since world peace forum becomes an event of exchanging experience, he said.

For Muhammadiyah people, Din said, it was a gift from God that the organization which he led and established on 18th November 1912 now a century-old. Passing through long period of time, facing the ups and downs of civilization and challenges, Thank God Muhammadiyah can still exist, Din said

Also attended the events among others were Minister of Religion Lukman Hakim Saefudin, Minister of Health Nila F Moeloek, and ambassadors of friendly countries. (SetwapresRI/ES)