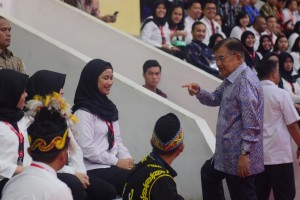 Civil Servant Candidates (CPNS) should always remember their duties to serve, Vice President Jusuf Kalla said when he delivered presidential lecture on behalf of the President, at the opening of basic training for around 6,000 CPNS of last year selection, at Istora Senayan, Jakarta, Wednesday (24/7).

The Vice President stated that their contribution to serving can be constituted in different forms based on their respective jobs. Kalla cited a few examples, such as, a teacher’s way to serve is by teaching and educating the younger generation; a way of civil servants working for the Ministry of Health to serve is by improving public health; and so on.

“We should uphold a principle of acceleration (during service),” he said, adding that a civil servant should not be stuck in old mindset that they must be respected and served by the communities, as well as have better-living facilities.

Kalla further said that global competition drives change. Therefore, civil servants should broaden their minds and develop a great mindset. According to him, the Government will provide good income and benefits for civil servants who are able to fulfill their duties.

The candidates were also reminded to be ready to work anywhere within the republic as well as to carry out their duty successfully. He emphasized that in today’s freedom of the press, the public can criticize public servants for being incapable when carrying out their tasks.

Kalla also motivated the candidates to establish a mutual relationship with the communities. Civil servants, whose salary taken from the state and regional budgets, must encourage economic capacity as well as entrepreneurs ability, whether they are big businessmen or MSMEs businessmen, in order to boost the regional economy and nation’s economy since taxes from business sector significantly contribute to the State and Regional Budget.

He, once again, emphasized that civil servants should serve the communities, entrepreneurs, and all layers of the society to create an advanced government that has strong economic growth and per capita income. (FID/OJI/ES)