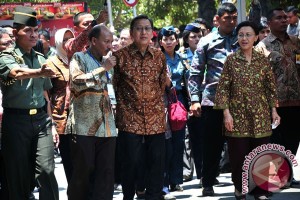 Vice President (VP) Boediono said that government strove to secure batik industry from being merely controlled by big players. Batik industry should be maintained as economic power of the people.

There are still spaces to develop batik, not only as the archipelagos cultural value, but also as economic products which can provide welfare for the people, Vice President said as he opened National Batik Week at Jatayu field, Cultural Region of Pekalongan city, Central Java, on Wednesday (8/10).

Therefore, VP asked government ranks to help batik artists and producers to capture the taste of the market and present products for Indonesian middle class with high purchasing power. This should be supported since there is no way for small scaled entrepreneurs to do it themselves, VP Boediono who was accompanied by Mrs. Herawati Boediono said.

As for technology side, according to the VP, central and local governments could cooperate by involving other parties in search of the right technology to develop batik industry.

Dont make easily faded or broken batik, make it interestingly colorful. Even if we want to target it to higher level of consumers who are concerned with environment, we must seek environment friendly batik products, VP explained.

He continued that it had to be done so batik products could be continuously welcomed by the market, which eventually would prosper batik artists and entrepreneurs. Batik should be a product with added value, not merely score products.

VP Boedione recalled that his childhood was close with batik industry as his grandparents were batik artists and entrepreneurs. I can distinguish which one promissima mori or prima mori clothes, which Batik from Yogya, Solo, or Tulung Agung is, he said.

Pekalongan Batik, VP continued, had its own characteristic since it was influenced by global cultures which long had become part of the culture of cities in Northern Coast of Java, such as influence from China, Arab, Japan, and even Netherlands.

However, in developing batik tourism, Pekalongan could even raise other aspects which in the end could give contribution to the development of the region. Indonesias development depends on the development of each region, because central government cannot provide everything. If region develops, then so does the central, he said.

The aims of this event were to promote Pekalongan as the icon of national batik, raise the unexploited batik potential, give added value to batik as creative industry and improve the welfare of batik entrepreneurs in Pekalongan. A piece of batik, harmonious cultural breath Pekalongan Mayor Basyir Ahmad Syawie said.