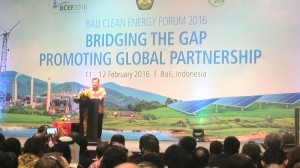 Vice President Jusuf Kalla explained the importance of energy and cost efficiencies by using advanced technology. Therefore, the Government expects to cooperate with the investors, particularly on clean energy development.

When delivering a remarks on the 2016 Bali Clean Energy Forum in Nusa Dua, Bali, on 11-12 February 2016, which was initiated by the Ministry of Energy and Mineral Resources (ESDM) and International Energy Agency (IEA), an intergovernmental energy organization made up of Organization for Economic Cooperation and Developments (OECD) 29 member countries which lately promoting clean energy development, the Vice President asserted that the Government promises to provide ease investment procedures for investors who wish to participate in the electricity development, sources specifically from clean energy.

According to the Vice President, Indonesia as an archipelagic country receives benefits from the abundant potential of renewable energy, such as all year solar energy, geothermal, sustainable wind power, tidal energy, and others.

The electricity potential sources from new and renewable energy in Indonesia could reach 300 GW, but until now it has not been maximally used, Jusuf Kalla said.

In his remarks, Minister of Energy and Mineral Resources (ESDM) Sudirman Said asserted that Indonesia is currently preparing to enter the new era by maximizing the new and renewable energy which can be relied as the substitute of fossil energy.

Sudirman mentioned that Indonesia must be aware of the price of energy which is very cheap at this time so that we will not be trapped.

Along 2015, Sudirman added, the Ministry of ESDM has conducted a program to use waste oil for biofuel, Energy Patriot program which gathered youth volunteers to relay electricity information to remote areas, the contruction of solar-powered electric generators (PLTS) in Kupang, and others.

The event which featured a theme Bridging the Gap and Promoting Global Partnership was held to gather leaders of the governments, businessmen, international institutions, academics, civilians, and young generation who involve in energy sector to discuss the acceleration of clean energy development in Indonesia as well as global initiatives for clean energy technology innovation.

In the meantime, the Governor of Bali Province I Made Mangku Pastika explained that Bali was chosen as the location of the forum because Bali is going to be the first Clean Energy Center in Indonesia by developing Clean Energy Center of Excellence as the core of development, researches, and facilities of clean energy project. So, we hope, 100 percent of energy in Bali will be clean energy.

The project of clean energy development in Bali is expected to absorb labors and boost the economy in Bali and in line with 5 philosophies in Bali Development, such as pro-growth, pro-poor, pro-job, pro-environment, and pro-culture, Pastika said (Banyu/Aqif/Ayu/Deputi Kemaritiman) (RAS/MMB/YM/Naster)