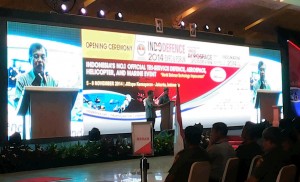 Vice President Jusuf Kalla during the opening of the Indo Defence 2014, in Kemayoran, Jakarta, Wednesday (5/11)

Vice President Jusuf Kalla (JK) emphasized that we must be capable of developing primary-weaponry-defense system (alutsista) technology at home in the future. He called attention to the fact that the definition of war has now shifted from the one typically related to soldiers capabilities to fight in wars to how to master military technology.

Wars can be won by those or countries who have more sophisticated technology, Vice President JK stated when he opened the defense industry exposition the 2014 Indo Defense Expo in Jakarta International Expo, Kemayoran, on Wednesday (5/11).

According to Vice President JK, present wars have changed significantly. They seldom consist of armed clashes any more but have turned into battles of technology. The winners are those who have the more sophisticated technology.

Technology development, Vice President JK continued, must be convertible into other industries which can yield economic benefits. On the other hand, common industries must also be able to serve as defense industries.

Vice President JK gave an example by mentioning automotive industries which can also produce tanks. It means that in addition to strengthening national defense, defense industries must also be convertible to bring benefits.

Our country had no fund to buy weapons. Then Pindad (state-owned arms manufacturer) which produced pots and pans was then transformed into a weapons industry by cooperating with automotive and machinery industries. We are here in the Indo Defense Expo, hoping for wide and mutually-supporting cooperation, because it can help bring peace, Vice President JK added.

The defense industry exposition the 2014 Indo Defense Expo which is staged on 5-8 November 2014 in Jakarta International Expo, Kemayoran, displays the products of weaponry from around 700 defense industries from 56 countries.

The 2014 Indo Defense Expo is expected to also encourage cooperation with other countries in fulfilling TNIs (Indonesian National Militarys) needs of primary-weaponry-defense system (alutsista), Minister of Defense Ryamizard Ryacudu said in his remarks.

It is expected that this exposition will be visited by more than 20 thousand visitors coming from Indonesia and other countries. This exposition is a big-scale one on record.

Indo Defense is a bi-annual exposition hosted by the Ministry of Defense. This years exposition is the sixth one.

The countries which are participating in this years exposition are, among others, Qatar, Malaysia, East Timor, Japan, Pakistan, Sweden, Portugal, Brazil, Czech Republic, Turkey, the United Kingdom, France, Singapore, South Korea, Australia, the USA, and Russia.