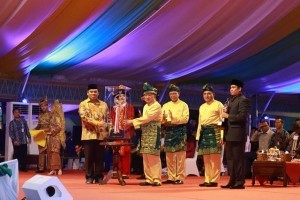 The closing ceremony was marked by beating of the traditional drum “beduk” by Vice President Jusuf Kalla, accompanied by Minister of Religious Affairs Lukman Hakim Saifuddin and Governor of North Sumatra Edy Rahmayadi.

In his remarks, Vice President Jusuf Kalla told the participants the history of the MTQ. According to him, the idea of ??the MTQ came from a Medan citizen.

“I remember when the MTQ was organized for the first time in Makassar 51 years ago. The head of state radio network RRI in Makassar who was also a Medan citizen, Pak Sani, held a Quran recital competition on the Radio. That was the beginning of the MTQ competition ” Jusuf Kalla said.

“Once again, I thank the late Pak Sani (for his idea),” Jusuf Kalla added.

In the meantime, Special Capital Region of Jakarta (DKI Jakarta) became the winner of the MTQ. The announcement of the winner was made by the Chairman of the Board of Judges of the MTQ M. Roem Rowi during the closing ceremony, while the MTQ trophy was handed over from Vice President Jusuf Kalla to Regional Secretary of DKI Jakarta Province.

The final medal tally of the 27th MTQ is as follows: